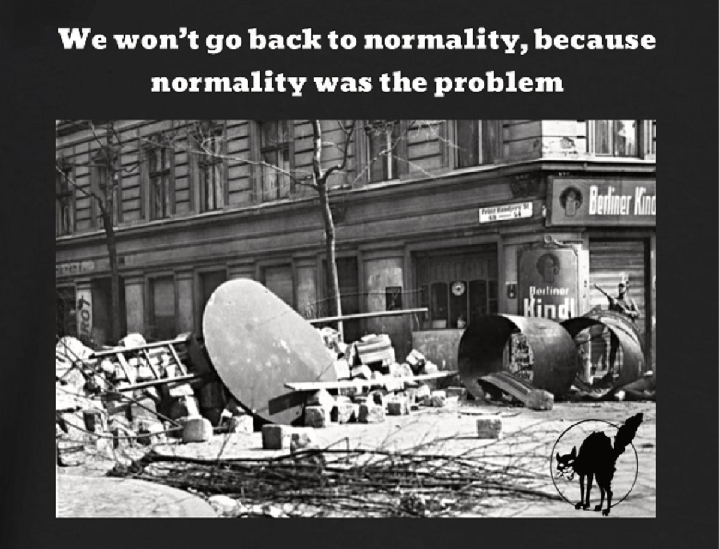 Preparing the next stage of the social war

Wuppertal. German territory. May 26. 2020. So now the so-called contact bans are eased more and more. They never existed at most work places anyway, only social life was completely killed by the German state. And now parts of the state of emergency are being eased again. That’s actually not surprising as the whole show, the prelude, the first act and the now started second act, was performed to protect the economy. That might sound strange, but it isn’t.

You will find other pieces written by Riot Turtle here.

Yes billions were lost, and the economic crisis is far from over. It’s actually just starting. Mid-February: Officals of the German federal authorities for disease control and prevention, the RKI [1], were still saying “it’s similar like a flue” and “It’s no big deal” during press conferences. Yes at that time virologist and “national hero” Droste was downplaying the coronavirus too. Working for a federal agency like the RKI means giving up independency and so the remarks of Wieland, Droste and others until mid-February are not surprising. Similar remarks came from federal health minister Jens Spahn [2] in the early days of the so-called Corona crisis. They were all still hoping the virus would not hit Germany and the capitalist machine could continue with the exploitation of life on earth.

That started to change early March. The coronavirus developed into a pandemic and Europe got hit with full force. The Merkel government and logically also the Federal Agency RKI changed their course. The “Stay at home” mantra started and soon the state of emergency was declared by decree. Politicians started bubbling that “we are all in the same boat” and “we need to stick together”. But for many people the ship was already sinking before Corona, the homeless, the precarious workers, the unemployed, the refugees and many others. One of the states with major arms manufacturers on the planet were practicing a shut down to protect life? To protect the population? No. As Sebastian Lotzer wrote: “The imposition of the state of emergency, as well as the partial withdrawal, was primarily “due to economic interests”. A rampant pandemic with a high number of sick people at the centre of the exploitation machinery should be prevented, the avoidance of deaths is only important as a basis of legitimacy for reasons of reason of state, otherwise one would not be prepared to wage wars at any time, which could also claim a high number of victims among the members of one’s “own population”.“

Apart from some exceptions, there was no opposition against the repressive state measures from most parts of the left. Like in many other countries, the crisis of the left is actually not new in Germany. Many revolts in the past years were started by others. In the Banlieus of France, in the suburbs of Santiago de Chile and hungry people in many other territories. In that sense the acceptance of the Corona related state of emergency by major parts of the left can also be seen as an eye-opener. Resistance will come from somewhere else and if people don’t want the far-right to benefit even more from the authoritarian state reaction to the pandemic it better comes fast. In some states, like for instance France and Chile, parts of the left joined forces with new actors on the field, what will happen in Germany?

The parts of the capitalist machine that were shut down are starting to resume their destructive operations again. But although the state of emergency was rather to protect the interests of state rulers and their capitalist allies, and had only something to do with health protection along the way, billions of Euros were burned. Now guess what…? The clowns of the CDU want us to pay for it, while at the same time the “economy experts” are preparing the next round of gifts for corporations, i.e. the next round of social warfare is about to start.

The conservative CDU faction in German federal parliament, the Bundestag, is already positioning itself. The economy working group of the CDU has produced a six-page paper entitled “Growth Programme for Germany: 10 Points for a New Start for the Economy”. The direction they are proposing is focusing on “broad relief for the entire economy.” Tax reductions and other gifts for businesses. The demands on the labour market contained in the paper are, for example, extending working time regulations, which were softened during the Corona crisis and currently only apply to so-called system-relevant professions, for all small and medium-sized companies. This would allow daily working hours of up to twelve hours and shorter rest periods. A reduction or at least a waiver of a further increase in the legal minimum wage is also demanded in the CDU papers. The puppets of industry also wrote: “Increasing expenditure and lack of revenue in the social security system must be offset by cuts, especially in benefits not covered by insurance, or – if that is not sufficient – by subsidies from the federal budget” In other words, the CDU wants the unemployed and workers, the “bottom” of society, to pay the losses of shareholders and major corporations. This CDU paper is nothing else than another declaration of social war. Apropos the state and protecting the health of the population… its well known that the life expectancy of the poor is way shorter than the German average. So I repeat again: The Corona related state of emergency was never about health protection for all. We were never in the same boat and again capitalism is trying to let our boat sink.

The mixture of increasing surveillance, the deadly experiment that all other people are possible enemies because they could carry the virus (so stay home, don’t touch, don’t hug and keep distance, but watch daily state press conferences because they know what is good for you) and the preparations for a new round of social warfare are ingredients that will cause major revolts in many territories in the weeks, months and years to come. So… why not actively work on that here?

[2] Jens Spahn (born 16 May 1980) is a German politician currently serving as Federal Minister of Health in the fourth Merkel government. He is a member of the lower house of the federal parliament, the Bundestag (German: Mitglied des Deutschen Bundestages, MdB) for Steinfurt I – Borken I and is a member of the centre-right Christian Democratic Union (CDU). Spahn graduated in 1999 from the Episcopal Canisius school in Ahaus, North Rhine-Westphalia. In 2001 he completed an apprenticeship as a banker at the Westdeutsche Landesbank, and worked until 2002 as a bank clerk. In 2003, Spahn began studying political science and law at the University of Hagen. In 2008, he obtained a bachelor’s degree, followed by a master’s degree in the same field in 2017. https://en.wikipedia.org/wiki/Jens_Spahn