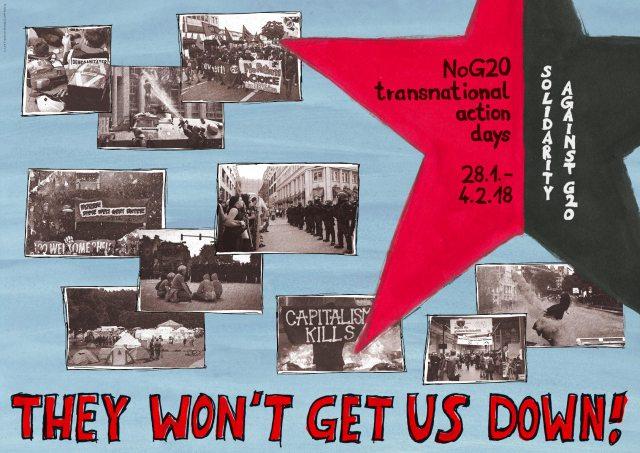 Originally published by United We Stand.

After the successful resistance against the politics of the G20 this summer, we are calling for days of action in the week from January 28th to February 4th. During G20 in Hamburg we were active with many of you. We want to take that experience up and make it visible in many places with many different actions.

We have 2018 already and our friends and comrades remain in pre-trial imprisonment since the g20 summit. The image of the violent dangerous perpetrators is still stylized. Brutal Police assaults before, during and after the G20 summit are played down and supposed to be forgotten. The myth of civil war-like conditions in Schanzen district persists in public view and helpfully provide the court with a basis for their arguments to impose absurdly high sentences. This is to distract attention from the idea of the G20 to take place as a counterinsurgency exercise in the field of urban space. The strategy and escalation concept of the cops could only fail.

The “independent” judiciary goes all out in its interpretation of their laws to impose draconian punishments like Peike’s. He has been in custody since July 6th and for bad luck got the judge Krieten, who sentenced him to 2 years 7 months. Peike however filed an appeal which will start in February. Also various other appeal proceedings will start soon.

But not only the draconian punishments should serve as a measure of deterrent. Also the raids on people who were attacked at Rondenbarg and the public search with pictures and videos of activists who took part in public meetings during G20, both of which had been effectivly staged in media, have the goal to frighten people off from taking part in future demonstrations and to keep people silent.

Resistance against the politics of the g20 shall be criminalized and the current conditions and power relations shall be strengthened. Politics and conditions that are based on the unequal distribution of goods, that flatter racist and sexist represantatives, that negotiate with despots and murderers, that are anti-(queer) feminist and don’t hold back with racist acts and homophobic expression. Politics and conditions whos actions on climate and environment are desastrous and who continuously develope the export of weapons aswell as conduct wars. And those who take their disagreement on the streets shall be silenced by their architecture of security.

With this in mind, we call for days of action from 28th of January to 4th of February.

Let’s not be blocked and intimidated any further! Let’s show them, their strategy won’t work. As long as this society is how it is, there will be resistance.

Let us show with a variety of actions that we challenge this system. There are no limits to your imagination. Do what you want to do – from baking cakes to informational events to taking the streets to direct actions. – Everything is possible, nothing is mandatory!

Please send us dates and pictures of your actions to: unitedwestand@nadir.org [key]