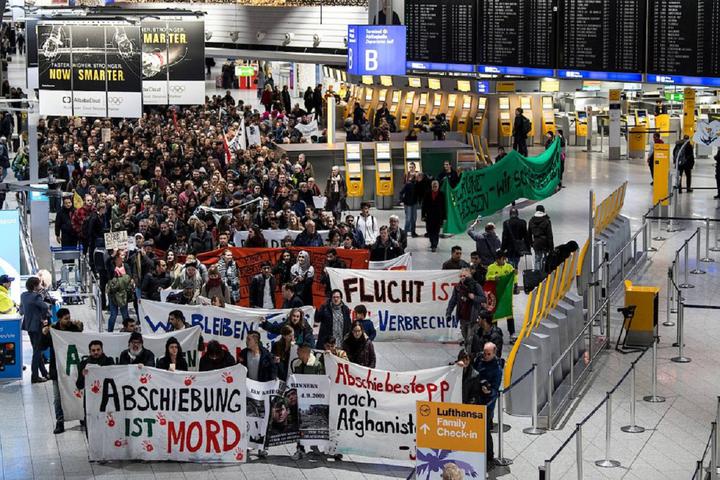 Berlin. A few days ago we received the information that a mass deportation is scheduled from Berlin-Schönefeld Airport to Afghanistan on the 7th of April. While strengthening the lock-down in the name of careing, during the pandemic, the German goverment has conducted even more deportations than before. Since November 2020, we have counted 75 charter-deportations and almost every weekday at least one more is added to the list.

Originally published by Kontrapolis. Image above: archive image from a protest against deportations at Frankfurt airport.

We call you to act against this and all deportations because they are a clear continuation of the fascist and colonial border system we live in. Deportations are never isolated facts nor a matter of individuals! For years we have being marching screaming “we have space”, “Wir haben Platz”. Well, we wish this would be the problem. This mass deportation now from Berlin shows us that this ain’t a material problem. Deportations are a political and ideological determination, mechanisms of capitalism and nationalism, that can happen only through the perpetuation of colonial borders.

While sending weapons to murder populations in Mexico, Yemen, Iran, Syria, and Afghanistan itself. Germany is granted the power of forcing people into situations of deaths. Every single deportation is a clear continuation of the racist German and European migration system: a system that defines migration as a privilege for European white people. It is our decision on which side to stay, either ignoring the situation and supporting the militarist and imperialist politics of Germany or out on the streets building up anti-racist solidarity and autonomy.

We all need to show our solidarity and draw attention to this situation.
Write texts, go placarding, demonstrating, spraying and destroying. Every contribution is a small spark that will lead to the stop of this mass deportation! Become active and be in solidarity!

WE NEED PRACTICAL SOLIDARITY.
MIGRATION IS NOT A CRIME!
NO DEPORTATION! NOT IN A PANDEMIC, NOT EVER!

Background information on Afganistan
Germany has been at war in Afghanistan since 2001 and is responsible for the deaths of many civilians. Exemplary for this is the attack on a tanker truck, which was ordered by the German military Georg Klein and killed over a hundred people. But it is not enough for Germany to have destabilized the country, which has been in civil war for decades, through its military presence. Not even in Afghanistan, where the German state directly contributes to the reasons causing displacement, does the state face up to its responsibility for the suffering and accepts refugees from Afghanistan. Rather, in more than half of all cases, people from Afghanistan are denied asylum, migration is illegalized and criminalized.

Since December 2016, people have been deported to the war-torn country of Afghanistan, in an almost monthly basis from Germany to Kabul. Even though deportations to the country were only suspended between March and November 2020 because of Corona, only to be resumed. On Wednesday, April 7, the 38th deportation is announced to be happening.

Due to the Corona pandemic, the situation in Afghanistan has worsened. In addition to the civil war that has been going on for more than 40 years and the terror by the so-called Islamic State and the Taliban, the percentage of people living in poverty has increased drastically to almost 90%. In January 2021, the German government declared Afghanistan a Covid 19 high-risk area. Access to health care is nearly impossible for the majority of the population.1