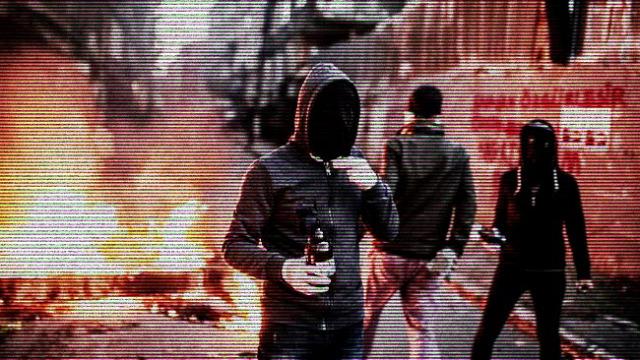 For more than 6 weeks we have had to watch the Turkish state attack and occupy, together with Islamist groups like ISIS and Al-Qaida, Afrin, the most western canton of Rojava. In this extermination campaign, the invaders are neither deterred by the deliberate bombardment of civilians nor by the use of chemical weapons. The Islamist mercenaries and fascist Turkish soldiers leave a trail of devastation, plunder, rape and murder, they practice an ethnic cleansing of the territory of Kurds. So far, more than 300 civilians and many militants have given their lives, dozens of villages have been destroyed and hundreds of thousands of people have had to leave their homes.

Despite the determined resistance of Afrin’s people and their YPG / YPJ / SDF defense units, the Turkish army manages to gain more ground every day. While the Turkish offensive was stuck in the border area of the canton for the first month, in recent days important small towns such as Raco and Shera have been conquered by the invaders. Their destination is Afrin City, the place where civilians have fled the villages and small towns they have conquered so far.

This is made possible by the massive use of modern NATO technology such as fighter jets, artillery, tanks and drones. The fascist-Islamist war of aggression against Afrin is not only Erdogan’s attempt to destroy the Kurdish freedom movement; While Russia opens the door to the Turkish Air Force and the Syrian Assad regime is de facto inactive, NATO actively supports this war with intelligence information, military technology, weapons and ammunition from Western factories. The hypocritical messages from the palaces of power can not hide the fact that this war is nothing but the reckoning of the rulers with the revolution of Rojava. It is a reckoning with the attempt to counter the capitalist system with a self-determined alternative of radical democracy, women’s liberation, real gender equality, and social ecology.

As radical left in Europe, we should be aware of the historical significance of these days. The attack on Afrin is an attempt to destroy the most promising revolutionary project of our generation. The Rojava Revolution is not only the only significant emancipatory perspective in the Middle East, but also one of the worldwide last remaining glimmers of hope for another world.

Like no other revolution of the last decades, Rojava has inspired us and shown us how radical and beautiful the struggle for the liberation of a society can be. The heroic resistance of YPG and YPJ in Kobani and the self-organization of the population under the initiative of self-liberating women cast a spell over thousands of leftists, anarchists, socialists and feminists. Worldwide, this revolution was discussed, admired and given solidarity, hundreds of people made their way to Rojava and participated in the resistance against ISIS and the building of a new society. In spite of all the contradictions, the Rojava movement, with its determination, its attachment to the people and the concrete implementation of our utopias, has become the most important focal point of the global struggle against capitalism, patriarchy and racism.

Today, this project is standing with its back to the wall. The war over Afrin is a struggle for existence or not-existence for the revolution in Rojava. If Afrin falls, Minbij will fall as well. With a victory for the Turkish state west of the Euphrates, American imperialism will also rethink its regional strategy and consider to hand over northern Syria to Turkey-affiliated Islamist militias under the FSA label aka ISIS and Al-Qaida / Al-Nusra. This would not only be the beginning of ethnic cleansing and the bloody end of the Rojava revolution, but also the beginning of a new phase in the development of Turkish fascism as a source of worldwide Islamism – Erdogan’s dreams of the new Ottoman Empire with him as Sultan at the head would no longer have any counterpart. The dictatorship inside would be consolidated for decades, the colonial expansion would be extended to the outside. The Middle East would be driven deeper into the chaos of war and annihilation without a force that can develop an emancipatory alternative.
The fact that developments in the Middle East have a direct impact on political and social processes also in Europe and other parts of the world has not only been shown by the attacks of ISIS in recent years. The rise of racism, sexism and antisemitism in European societies, the new militarism and the ever-increasing calls for the authoritarian state and thus the comeback of the radical right, are directly related to this. We must be aware that the conditions under which we, the radical left, are struggling in the centers of power are also shaped by the international balance of power. And the same is true of the political conditions in the metropolises of capitalism, which influence the conditions under which our friends fight in Afrin.

The people of Rojava are still standing, YPG / YPJ / SDF are opposed to these developments. And this resistance has so far only been successful because people have decided to give everything for it. However, they will not be able to defend against the brutal superiority of the attacking Turkish army and their Islamist helpers without international support. But despite weeks of worldwide protests, the states of North America via Europe to Russia hold on to their cruel decision to end this revolution, and seem to have sealed the fate of the people in Rojava. The resistance in Afrin will only succeed if we are ready to give it all, even if it is the most valuable.

We will not continue to watch this injustice passively. We will not leave the people in Rojava and our fighting comrades alone, because the war against Afrin is just as much a war against us. The Turkish attack on Afrin is NATO’s political, economic and military push into the heart of our revolutionary struggles, dreams and hopes. We will carry this war back to where it is approved, supported, legitimized and produced. We will drive up the costs for those who benefit from this war. We will hold to account those who endorse the murder of civilians and legitimize them as a supposed “war on terror”. And we will make the deafened European public listen up and remind our societies that we all have a responsibility for what governments are doing on our behalf.

In this sense, we call upon all emancipatory forces worldwide to break the silence and give a voice to the people of Rojava that no one else can ignore. If not us, who else will be able to remind our societies of their responsibilities? The situation in Afrin is an existential threat to all our revolutionary perspectives – when, if not now, is it time to risk everything? If Afrin falls, it will be too late. Only if we give everything, we will be able to win everything.

The past solidarity actions with the resistance in Afrin have been right and good. We greet all the comrades who have been organizing, demonstrating and carrying out direct actions for weeks. These were important moments, but they are not enough. In the current situation, the murderous silence and the support of fascist Turkey by the international community forces us to other means. We must exercise our right of self-defense of our hopes.

Direct actions can not only be a concrete intervention in the war and propaganda machinery of the Turkish state and its helpers, but have much more potential to draw attention to the extraordinary urgency of the situation. Burning Turkish consulates, sabotaged armaments companies and mass militant actions against the symbols of capitalist and imperialist rule will break the silence and make the atrocities of Turkish fascism no longer ignorable. The system in Europe thrives on us to engage and stun, to pacify conflicts and contradictions – let this false illusion of social peace go up in flames. Let us show the rulers that we will resist the attacks with the people of Rojava and defend by all means the revolution in Rojava, which is also our revolution.

We call on Monday, 12.3.2018 to start with this militant campaign wherever we can hit the rulers: Radical, creative and courageous, involve you and organize local actions as a prelude to a resistance that will show the powerful of this world that Afrin is not alone. Like the people of Rojava, we also say: “Together we will fight, together we will lose, or together we will win”.

Afrin will not fall!

We will collect all direct actions in solidarity with the Afrin resistance and possible targets at: fight4afrin.noblogs.org