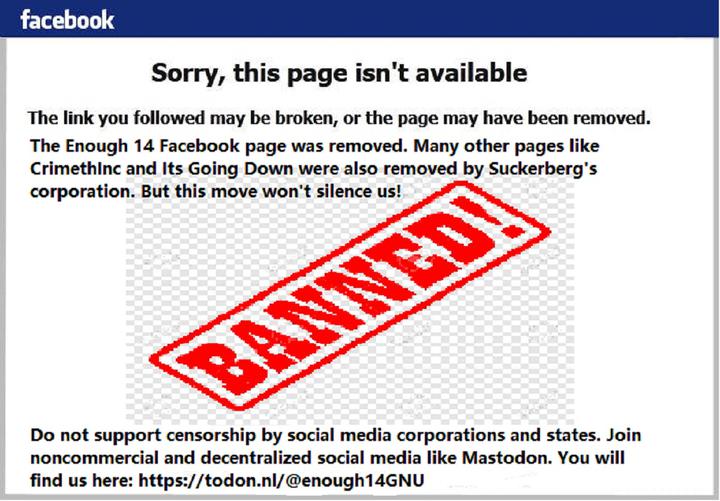 Last night the Enough 14 Facebook page was banned. A statement by some of the Enough 14 collective on corporate social media and digital censorship.

This quote shows that the people that decide which content is censored, actually don’t know what they are doing. There are no “offline anarchist groups” which support far- right groups like QAnon. How much police Facebook pages were taken down by Facebook? The police that is responsible for numerous deaths and carries out “violent acts amidst protests“. And what about pages of states that invaded other territories? Facebook has no problem with violent groups, as long as those groups are part of, or working for, the ruling class.

The Facebook action is a direct result of pressure by the Trump administration to crackdown on anarchist and antifascist groups after the police murdered George Floyd and the revolt that followed. Its a crackdown on social movements that comes after Donald Trump demanded this crackdown in a series of social media posts during the past months. Although we are based in Europe, we reported a lot about the ongoing revolt in the US and have many readers in who live on Turtle Island. That seems to annoy the Trump administration and accomplices like Mark Suckerberg.

Digital censorship is not new and we actually expected this repressive move by Facebook. Twitter also sharpend its “regulations”. Corporate social media are in the hands of the bosses, and it was a matter of time that they would crack down on anarchist projects.

To rely on corporate social media to spread our message isn’t the smartest thing to do and we actually hate Facebook and Twitter. We see the Facebook ban as an opportunity. It will intensify our efforts to build our own networks, on the street and in the virtual world. We started to build up our Mastodon account months ago, to get more independent from corporate social media and one of the reasons we opened the Enough Info-Café in December 2018, was to intensify our work in the neighbourhood again. Although the Enough space is in serious trouble because of German COVID 19 regulations, we do not intent to give up and close the project.

Let’s use the ban on Facebook as an oppurtinity to leave this corporate nightmare behind us and move on. Stuttgart, Utrecht and Paris show that there are many things to do. A new world is emerging. A world without Suckerbergs and Trumps. Its taking shape in the streets.

Some of the Enough 14 collective

On Facebook Banning Pages that Support CrimethInc.com – And the Digital Censorship to Come by CrimethInc and Its Going Down: https://de.crimethinc.com/2020/08/19/on-facebook-banning-pages-that-support-crimethinccom-and-the-digital-censorship-to-come

A note on Facebook’s crackdown against US anarchist groups by Freedom News: https://freedomnews.org.uk/a-note-on-facebooks-crackdown-against-us-anarchist-groups/