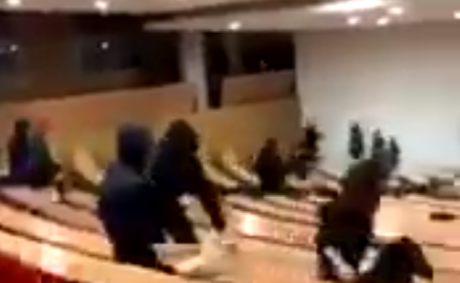 Brutal fascist attack on student occupation at University of Montpellier

A group of men in balaclavas carrying batons and tasers attacked students occupying a lecture hall at Montpellier University. Some of the attackers have also been identified as faculty members.

The attack took place late in the evening, after a national day of strikes and demonstrations organized by public sector unions. Students all over France had joined the marches, protesting against a recent law which establishes a form of selection at the entrance of universities. The student movement, which started on February 1st, led to a wave of occupations in universities in Toulouse, Bordeaux, Lille, Strasbourg, Tours and Paris. Some of these occupations led to police interventions, like in Bordeaux, where students were beat up by riot cops on March 7.

But in Montpellier, where police apparently refused to intervene when a group of students occupied a law faculty lecture hall, some of the men who attacked the students have been recognized as faculty members. A far-right blog also attributed the attack to the GUD, a violent fascist group. Four students were hospitalised, including two with serious skull injuries.

Testimonies gathered the next day described the dean of the law faculty, Philippe Pétel, as the organizer of the attack: he apparently opened the doors to the dozen hooded men, and cheered as students were beat up. On the next day, during an interview, he appeared remorseless, and said he was "proud" of those who had resisted the occupation of the university by protesters.

After news of the attack broke out, hundreds of students gathered in front of the law faculty in Montpellier on March 23, asking for the dean's resignation. Gatherings and demonstrations were also organized in Rennes, Bordeaux, Lyon, Tours and other cities. In Paris, three hundred people gathered in front of the Sorbonne before being kettled. The dean eventually announced his resignation earlier today.