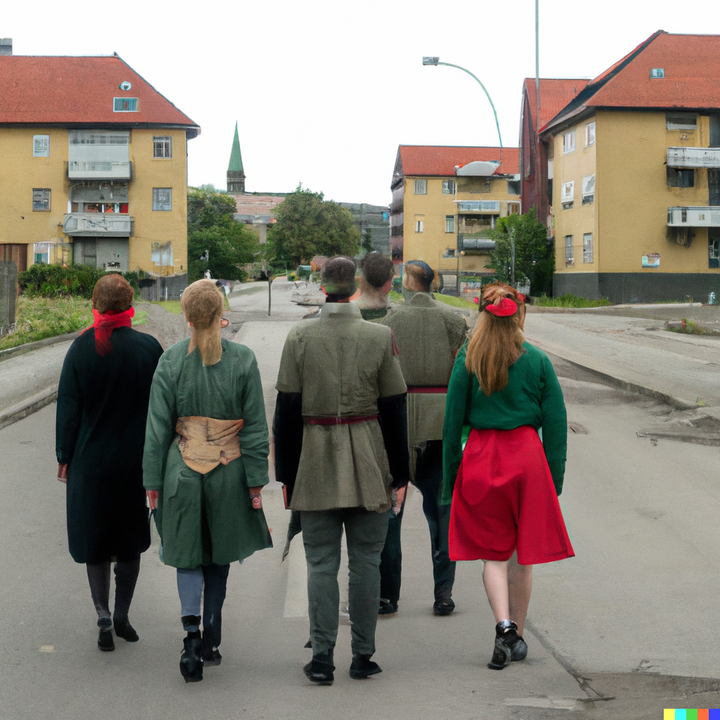 BACK TO THE FUTURE: ANTICAPITALIST CITY TOUR

Ever since the invention of time travel people have become interested in our near history in the era called "capitalism". This time, we're going back to the year 2022 to Lund, Sweden, to try to understand this, frankly, bizarre era. We'll be visiting some places unfamiliar to the modern person such as "workplaces" which were a kind of prison where people were made to go to every day or starve and "schools" which were specialized institutions to control the population and to ensure a smooth functioning of the class system.

While such places might seem strange to people like us who grew up in communism they seemed like laws of nature to people in this era. Therefore, we ask you to not reveal your background as time travellers, famously people in capitalism were not just unable to imagine another sort of society but sometimes reacted with fear and even violence when suggested that things could be different. While events during this time, like massive inequality, sexism, racism and environmental destruction, seems to have such obvious causes every class society like this one had to produce a certain set of ideas to make it seem justifiable or the system would collapse. We hope our time travel will be a pleasant way to spend a few hours and also perhaps serve to give us some food on how far we've come.

(So, what the hell is this? Good question! This is a tongue in cheek city tour where we pretend to be time travellers from a communist future going back in time. Our aim is to try to re-mystify modern life and communicate just how absurd capitalism is. This is then a great introduction to leftist perspectives and to our local social movements. We'll be walking for circa 1.5 hours at a leisurely pace, with several stops, through central Lund and end up having a nice coffee afterwards. We don't demand any form of roleplaying from you, but playing along a bit might make it even more fun. Bring an umbrella if there's a possibility of rain and a pair of shoes you can walk in.)