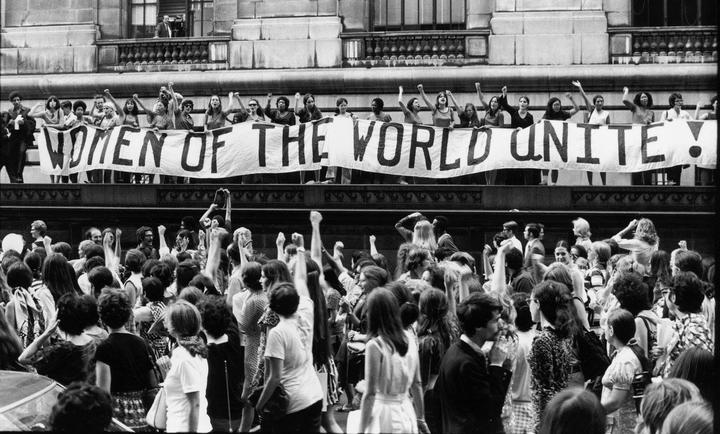 Around a kitchen table in a living collective in Gothenburg. Our hands has kneaded a dough, cut vegetables, shredded cheese. The pizzas are in the oven. Now we will eat and drink, and together do what we're afraid to do alone. Write.

”Who gave us permission to perform the act of writing? Why does writing seem som unnatural for me? I’ll do anything to postpone it – empty the trash, answer the telephone. The voice recurs in me: Who am I, a poor Chicanita from the sticks, to think I could write?”

Gloria Anzaldúa finishes her text on writing when hung-over, longing for pizza, a day in May 1980. She lingers on everything that can keep a woman (especially a woman of color) away from the task of writing - and how women can manage to write, anyway. ”Forget the room of one’s own”, she writes, and tells us to write on the bus, or in the queue to social services, or in the kitchen, she tells us to ”lock yourself up in the bathroom”.

We who write this text has tried to fend off all our duties, to try and find a time when we all can meet up and write. We who write this text has seen how some individuals in the organization dare to put their hand up and say ”I can write it”, when it comes to our political texts. Like a flower, growing: It's the men's hands that are extended towards the roof. We give them our trust, and thus we make them grow. They are our comrades. And now, we are many hands that want to help each other grow. And so, we grip the pencil from the hands that mostly hold it.

”I think, yes, perhaps if we go to the university. Perhaps if we become male-women or as petit bourgeoisie as we can. Perhaps if we give up loving women we will be worthy of having something to say worth saying.”

We want to write a text without giving up anything of what we are. We will write about what we want with feminism, what we think it can be, and has to become.

And in the mean time Gillette is paddling the surf board, newly shaved and fresh, to ride the last of the metoo-wave.
”Is this the best a man can get?” the voiceover asks himself, while different guys meet their own searching glances in the mirror, dragging the razors across their faces. Testemonies of sexual abuses are heard from the TV in the background.

Isn't it ironic? That feminism is subordinated under capitalism. Necessary feminist movements create resistance – but in the same time, they open new marketing angles. New niches, metoo-certified companies, consulting firms. Feminism is pacified and made into commodity. This is capitalism in its essence.

Talking. This we know, and we start here, in each others voices, which we strengthen by nodding, by confirming ”Yes! Exactly!”. The conversation goes along while we empty and refill the glasses. Between them, in the middle of the table, lies a phone which records our thoughts. Tomorrow the words will be material for text.
We also share the pencils between us and, watching the lit candles, pass papers around. Onto them we let our consciousnesses flow. They flow wildly, in different directions, despite our common headlines.

We invite you to follow a stream with us.

When #metoo came it was a strength, a revolution. It was something that tied people together. Not just any people: women and trans people. People that daily get beaten hard and harder than cis men, by patriarchapitalism. It became a movement, a way to make the private/personal political but we all know that when there is too much focus on the private, it risks tipping over and becoming individualistic.

Sexual abuse survivors stand together, demonstrating the power of the collective. And then something happened. #Metoo became a campaign where the value it had from the start changed. Abuse were no longer abuses. We stopped talking about abuse for what it is.
It's something that happens all the time, twentyfour seven and which still happens. It was as if metoo fetishized the sexual abuse and watered them down. This led to that the machinery behind was forgotten.
Metoo overthrows the order of silence – but what should be created in its place?
We have to raise the fact that abuse is structural. How patriarchy and capitalism work together to make women and trans people easy targets for cis men to abuse. The regular pattern that is patriarchy and the men's right to own the other. How it is hard to make feminism under capitalism and especially with patriarchy interfering. How hard it is to make feminism under patriarchy and especially with capitalism interfering. How non-cis-men live as hostages in patriacrchy where we constantly are under threat of having our right to exist taken away from us, to get to be human.

We are held hostage not only by the sexual violence we constantly endure, but also living in a world that expose us to violence in every aspect of life. We live exposed economically where we get payed much less than our male collegues for the same job. A material violence that gives us physical and mental damages, when we work. We get wear damage cleaning floors. We burn out in schools. We are forced to lift heavy in care work. We work our fucking asses off, getting shit together at workplaces when we serve incompetent male bosses, doing their work for them.

Metoo is an important historical event but it has been used to adjust details in the current system. The liberal system. The uprising against sexual abuse could have started examine other forms of justice. How can a survivor get real justice? How can communities change in their cores?

The patriarchal violence and murdering of women has in spanish its own word, feminicidio. It means that a woman is murdered because she is a woman. Why is this lacking from the swedish language? Why does our language talk around the issue?

When we already are living in the liberal utopia, the liberal ”feminist” can't do anything other than looking down on the machine it built. The machine is sort of finished and the only thing the liberal ”feminist” can do to fix it is to look at the isolated parts that can be fixed with laws, norms, metoo and so on. A revolutionary feminist has to look up and see that the whole engine is broken. Everything must go! Remember, we want the whole fucking bakery, not just loafs of bread handed out to us, and certainly not the crumbles. We need to look beyond and ahead.

And we sit around the kitchen table, bent over pieces of paper, writing:
I couldn't care less about the individual woman wanting a higher salary. I can't relate when I've been poor my whole adult life.
Who's victory is it that middleclass petit bourgeoisie-feminists get more payed, just because they take on jobs in traditionally male sectors? When care work is still underpayed?
A woman behaves like a dude and I'm expected to view this as a feminist success. But in the next feminist wave, dudes need to behave more like women. So that no woman ever has to cover for him again.
It's women who take care of the addicts when unemployment rises. It's about care, the work that never ceases.
We need a vision of the libertarian communist.
When the perspective gets to big, I get dizzy.

Some twenty years ago, the professor in political science Wendy Brown wrote about how the Left has lost its revolutionary horizon. After state socialism's fatal failures, and its fall, liberal capitalism stand as lone world dominator. And the Left has run out of steam. The dream of socialism is lost but the Left hasn't even mourned this dream properly, and is now content with criticizing and heckling the power, from afar. The promise of revolution was to tear down the old to create a new and juster world. To give up revolution is to resort to moralizing criticism, also internally. We only remark on each others words instead of focusing our efforts to examining what really is upholding oppression and capitalist exploitation.

It has to be the task of the autonomous left to revive a radical vision of an equitable world without class, with global equality, where every person is trans and none is cis. Or rather, a world where gender is so completely transformed and patriarchy so obliterated that woman and man, trans and cis are incomprehensible as categories, or means something completely different. Something we can't know yet, but that we will create together.

First we made pizza and shared it. Maybe a sense of connection is grounded in this practical care work. When we discuss, this mutual care is a foundation, perhaps a sense of safety, even when the discussion heats up or we do not agree. ”They obviously don't want me to starve.”
The next feminist wave needs to have room to screw up, to think and to learn. It doesn't suffice to walk around with different feelings, if we don't have the forums to discuss. To have a deeper sense of community.

Those who write alone write fast, but we are many. We are many and we want to speak strongly together. This takes time. It's a feminist slowness. It listens, picks up traces, lingers. It focuses as much on the process as on the result.