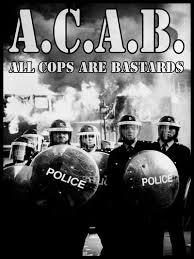 A.C.A.B. is an anti-police acronym. It’s an abbreviation for “All Cop[per]s Are Bastards”. Today, the A.C.A.B. we can find on many walls and slogans in graffiti, tattoo’s and another graphic which has the main goal to show antipathy against law enforcement and police. The first appearing of this acronym in public is in 1977 when a journalist from Newcastle spent the night in prison. He documented A.C.A.B. acronym written on prison walls. He published book “The Dictionary of Catchphrases” where it is written that A.C.A.B. acronym is from early 1970th and can’t be older until full meaning of words coming from 1920. British punk band, the 4.Skins populated acronym A.C.A.B.through their song with the same name during 1980-es.The 4-Skins, a British Oi! punk band, popularized the initialism A.C.A.B. in their 1980s song of the same name.

The acronym is often integrated into prison tattoos in the United Kingdom, commonly rendered as one letter per finger, alternatively sometimes seen as symbolic small dots across each knuckle. Using of ACAB, as we mentioned is most popular in the world of sports fans, especially football ones and their ULTRAS culture. It’s not weird to see graffiti, t-shirts, transparent and other equipment of football hooligan “decorated” with these symbols and acronyms. It’s their way to show their anger against police and law enforcement.

In past years, publishing of ACAB in public, in many countries was forbidden by law, so the football fans created an alternative. The new synonym 1312 means same as ACAB and that was a way to override laws in some countries. 1312 means that every number is one letter (1312=A.C.A.B., where 1 stands for A, 3 stands for C, 1 stands for A and 2 stands for B what fits the letters from the English alphabet).

Today, in most countries in Europe, publishing of these symbols is forbidden by law and punishable as a minor offense because it’s recognized as inappropriate behavior and abutment on riots.

ACAB – All Cops Are Bastards also stands for a 2012 Italian film directed by Stefano Sollima. The film focuses on the life of a group of riot control force policemen and their life coping with 'cleansing' stadiums from Ultras, public demonstrations, evictions and everyday family life.

A new recruit, Adriano Costantini, joins the squad for its 'high paying' salary, which he needs to support his mum. The two of them live in a small apartment from which they'll soon be evicted and, even though they had been assigned a public housing, that has been occupied by an immigrant family and is therefore uninhabitable. Adriano is prone to violence and often prefers the use of force even in situations where it is unnecessary, additionally fueled by the anger he feels over his mother's situation.

Mazinga is the leader of the squad and father of a rebellious teenager who starts to hang out with a neo fascist group and is embarrassed by his father's job. Mazinga gets stabbed during a confrontation at the stadium and loses control of one of his legs, prompting a manhunt for the culprit from his colleagues. 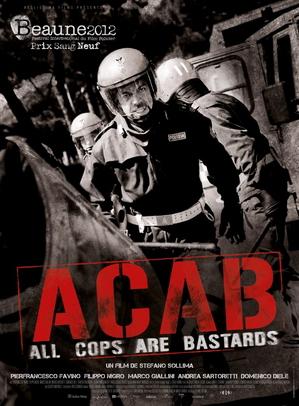 Negro ("Nigger"), another member of the group is going through a difficult divorce and is denied visitations with his daughter.

Cobra is the most dedicated member of the team. He believes in protecting his 'brothers' in arms above anything else, no matter the errors they may have committed. He believes in the job he's doing but sometimes the lines between protecting his fellow policemen and respecting the law get blurred. He may be one of the most violent member of the squada, also facing trial for beating a supporter during a football match.

The life of those four men unravel throughout the movie, while in the background the tensions between the police force, the soccer hooligans ("Ultras"), the immigrants and the fascists reaches its peak.